API documentation’s primary goal is to reduce that curve by providing everything in layman’s form. Excellent documentation makes API onboarding much easier — it reduces the time and effort involved in performing integrations for beginner consumers to advanced consumers.

People get confused when they work with APIs (Application Programming Interfaces). But there are powerful tools that can help developers. API documentation tools allow you to expose your API to your users and clients. You don’t have to code every single API response & request. With these tools, you can quickly create API Documentation with user-authentication mechanism & incoming webhook events.

Simultaneously, a self-service API portal can decrease the customer support required of the API provider. Obviously, we need to provide this documentation alongside additional components, community, and support staff. But all of that should be the second option. Consumers should be able to solve their issues by reading the documentation.

What is an API?

API or Application Programming Interface is a set of rules describing how computers and applications communicate with each other. APIs are shared by companies so that developers can create applications that use their software services.

What is Restful API Documentation?

API Documentation is a technical reference manual or an instruction guide that summarizes the complete information to use an API. It contains details about the functions, workflows, classes, return types, arguments, etc, along with tutorials and examples. Thus, it is important to have interactive documentation with a quick start guide, SDK examples, explanations on authentication info, request, and returns.

The API documentation also gives timely updates on the API lifecycle via code communication so that the user is aware of newer API versions.

API documentation explains the possibilities of your API and how to get started with it. It also serves as a guideline for developers to address their questions about syntax or functionality.

Good documentation is critical for the developer experience, which has an impact on API adoption and long-term success. A well-structured and well-written documentation that explains how to utilize and integrate an API successfully is beneficial to developers.

The reason for this is that no matter how effective an API is for establishing and extending your software services, it is useless if the developer does not understand it.

API documentation explains how to utilize an API and what services it provides. Thus, technical users, wanting to move forward in their software development, should be able to easily understand the value and usage of your API by referring to your documentation.

What are the benefits of API Documentation?

Here are listed some benefits of API documentation:

What are the methods of writing interactive API documentation?

You can generate documentation for your API in two ways:

The first is by manually writing the documentation. This method requires manually creating a template and writing the introductions, versions, and example code snippets. Hence, it takes a lot of time and effort.

Now, there are two ways by which you can generate documentation for your API. The first one is manually writing the documentation. This method requires a lot of time and effort as everything is being done manually, from writing the introductions, versions, to writing a sample output. This is an old fashioned way, but many API developers still follow this method. The second method is using API documentation generators. This method is completely automated and requires very little time — with the right tool, you could generate complete documentation in just 5 minutes. Most of the API-minded companies have switched to this method in some form.

What is the OpenAPI Specification?

OpenAPI Specifications is a common API description format for REST APIs. It is the most broadly accepted standard in the industry. OpenAPI, now on v3, defines a standard, programming language-agnostic interface description for RESTful APIs. It’s community-driven, falling under the OpenAPI Initiative, a Linux Foundation project. With OpenAPI as a backbone, API providers can more easily generate things like documentation, libraries, sandbox environments for testing, and other helpful tools.

So, below, we’ll review some of the best OpenAPI documentation generators. All generators listed here are open-source and most support OpenAPI v3.

Redoc is one of the best and open-source API document generators that supports OpenAPI v3 specifications. This tool is powerful and highly customizable. Redoc started as an API documentation engine for the Rebilly docs, and later became an independent company. Redoc comes in free as well as paid versions as per your requirements. Redoc is based on React JS and provides a three-column page where in the first column you have your explorer, in the second column you have the description of the selected index, and in the last column, you have a console where you can make API calls.

The first column shows all available endpoints with a little badge to denote the HTTP method, like GET, PUT, POST, etc. The last column also allows you to generate code for calling the API with their payloads. It supports PHP and C#. You can enable and disable CORS too. The tool is also capable of converting markdown into HTML code.

Redoc comes with a CLI tool that lets you check all your Open API definitions from a rule set to ensure you’re following all the OpenAPI best practices. Once you’re ready to publish the docs, you just need to run a single command.

DapperDox is another out-of-the-box open-source solution for authored API documentation. The tool is very flexible and lets you design the documentation pages in the way you want. Like Redoc, it also supports markdown.

DapperDox provides a neat and straightforward user interface with two columns. In the first column, you have your explorer, and in the second column, you have the API method details. It also allows you to customize themes for pages, which are not available in Redoc.

One downside is that DapperDox isn’t updated frequently, and it doesn’t yet support OpenAPI v3. Gauging from this unanswered issue, the maintainers are waiting on an upstream update to a Go parser. 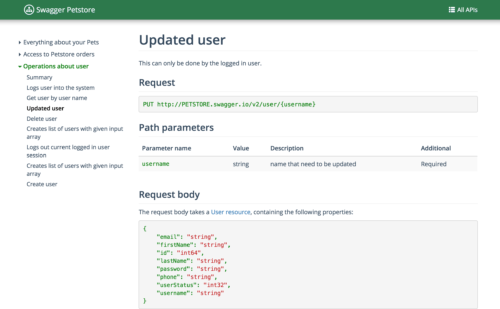 WidderShins lets you create API documentation out of OpenAPI 3.0, Swagger 2.0, AsyncAPI 1.x, Semoasa 0.1.0 definitions. Thanks to new features introduced in the latest update, WidderShins now uses promises instead of callbacks, and now it has options to output HTML directly.

The UI of this tool is very similar to ReDoc as it has a three-column page, where in the first column there’s an explorer, in the second column you have the description, and in the third column, you’ll have your console to make API calls as well.

WidderShins uses templates to generate markdown outputs, and you can customize them as per your needs. Mostly it is used in stage environments in the API development pipeline. WidderShins takes an API definition, then converts the written descriptions into markdown or HTML as needed by the renderer like Slate, Shins, ReSpec.

SwaggerUI, from Smartbear, is another great tool to generate documentation for your API. Using SwaggerUI, one can quickly check which endpoints perform what actions, making it very easy for API consumers to understand the API. SwaggerUI lets you interact with the API without implementing the logic.

It allows you to create API documentation in multiple formats like JSON, YAML, and markdown, making it easier to be edited by anyone. Unlike other tools, SwaggerUI has a single column view where everything is explained neatly in a collapsible bar form. SwaggerUI supports the latest OpenAPI v3 and is well-maintained. It also plays nicely with other Smartbear tools, as we’ve covered previously.

By creating a cross-language cookbook for all of your API’s major use cases, Lucybot makes it simple to explore API capabilities. The code samples also expand into a visually-rich working demo, so developers have everything they need to get up and running with your API as quickly as possible. It uses OpenAPI, markdown, and other open standards to create highly customizable documentation, as well as an API console and interactive tutorials.

OpenAPI Viewer is an OpenAPI 3.0 and 2.0 Spec viewer with a built-in console. The OpenAPI Viewer works with any framework and also without any framework. The branding and personalization features make it easy to follow any style guide. It has plenty of customizations available, like adding external contents at the top and bottom of the document, adding images, links, forms, and much more.

It also supports searching for end-points, and it has a built-in console to try out APIs. It has a clear separation of Request and Response info laid out side by side in a two-column layout.

RapidDoc comes with a console out of the box, which you can easily use to make API calls and test your API. You can change its attributes using JavaScript as you do in HTML. Like SwaggerUI, it also has a single column view with collapsible bars, and these bars contain the console with the JSON payloads.

Which Software Documentation Tool is Right for You?

Now comes the time to decide which software documentation tool you should invest in.

Let’s start on a blank slate and first figure out who your target audience is – developers or end-users. As you can see above, there are two types of software documentation tools. One is designed for end-users, and the second type is specifically meant for creating internal documents for developers.

Each tool mentioned above is unique yet similar in various ways. For example, all of them offer a good authoring system, but if you ask about security and granular permissions, not every tool has a feature for that.

Whether you are an engineer responsible for building a product, or a marketer looking to create engaging content, chances are that you’ll need to learn how to create an API documentation. Of course, these high-quality resources can come at a cost; however, there are dozens of free API documentation tools that can help you get your job done.

All the documentation tools discussed in this article can create API professional documentation. One can not explicitly deem any one tool as the best. The overall experience and requirements of an API documentation software depend on the user’s specifications, definitions, objectives, and documentation needs.