How to Capture Screen Video in Windows 10 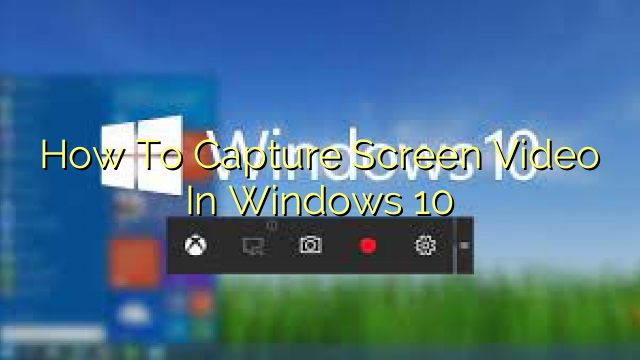 If a picture is worth a thousand words, then a video is worth a million. Whether you’re showing someone how to perform a task in an important application or you want to show off your gameplay, screen recording in Windows is a great way to do it.

Fortunately, both Windows 10 and Windows 11 have screen recording built right in as part of the Xbox Game Bar tool, and using it is extremely easy, even if you want to capture your activity in a non-gaming app. However, there are some limitations to Game Bar so you may want to use a third-party app such as OBS for screen recording if you’re doing something more complex than just capturing one application at a time.

How to Capture Screen Video in Windows 10

Built into both Windows 11 and Windows 10, the Xbox Game Bar has a number of features designed to improve your gaming experience, such as giving you quick access to Xbox chat and a peek at  your CPU and GPU activity. However, its most useful feature — whether you are gaming or not — is its ability to screen record MP4 videos.

There is one drawback to using the Xbox Game Bar to screen record: It only works within a single application at a time and cannot capture the Windows desktop or File Explorer. So, if you want to show someone how to do a task involving multiple programs — for example, programming a web page in a code editor and then viewing it in a browser — you would need to grab multiple videos. And if you want to show them how to do anything in the Windows 11 or 10 UI, such as using the Start menu, you can’t. For those activities, you should use another tool such as OBS, which we’ll show you how to screen record with later in this article.

2. Hit the Windows Key + Alt + R to start screen recording. A small recording widget showing how long you’ve been recording appears somewhere on the screen, most likely in a corner. You can also get here by launching the Xbox Gamebar (Windows Key + G) and then finding the capture widget, but the keyboard shortcut is much simpler.

3. Perform whatever actions you want and use your microphone to record audio. You can also mute the mic if you don’t want to capture any sound.

4. Hit the Windows Key + Alt + R again to stop screen recording. You can also hit the stop button on the widget You will get an alert that says “Game clip recorded. If you click on it, you will go into the Gallery section of the Gamebar app and be able to preview the video you captured. You can also find the MP4 file you recorded under your Videos/Captures folder.

While the default settings are probably fine for most people, there are a few options you can change.

2. Change any of the following settings. Note that though they use the word “game,” the settings should apply to any app you record whether it’s a game or not.

The biggest drawback to using Windows 10’s or Windows 11’s built-in Xbox Gamebar to screen record is that it can only work with one app at a time and will not show the Windows desktop or File Explorer. To capture your entire desktop and all the windows on it, you need a third-party app and, while there are many, we like OBS Studio for this purpose.

OBS Studio is very popular in the game streaming community because it’s free and great at broadcasting games out to Twitch and other sites. However, you can also use OBS to record the entire screen in Windows 11 and save it as an MP4 file, without ever streaming what you do.

1. Download, install and launch OBS Studio. When you launch OBS for the first time, if you haven’t already, you will be asked whether you want to optimize it for streaming or recording only. If you don’t plan to stream, choose “Optimize just for recording.”

2. Click the Plus icon under Sources to add a new source.

4. Click Ok on the dialog box that pops up. You can give the source a name other than Display Capture if you’d like.

6. Click the Start Recording button in the lower right corner of the screen.

7. Minimize OBS if you are screen recording from the same monitor that OBS is on.

8. Click Stop Recording in OBS when you are finished.

By default, your screen recording videos will be located in the Windows 11 (or 10) Videos folder. They are stored, by default, in the .mkv file format. However, you can change the output to MP4 or MOV files by going to the Settings->Output menu in OBS.

How to screen record on PC

Want to record the screen on your computer? Maybe you’re a professional who needs to capture your screen for a presentation at work, a software developer generating a how-to video, or just someone who wants to upload a helpful video clip to YouTube. Windows and macOS allow you to capture your screen activity thanks to built-in tools, though there are also many third-party screen-capture apps. Here’s how to get started.

Built into Windows 10, Game Bar is designed to record games that you play directly on your PC or those you stream from an Xbox console. However, it can just as easily capture screen activity from other applications. To set this up, go to Settings > Gaming > Xbox Game Bar and turn on the Enable Xbox Game Bar switch.

Here, you can also change any of the keyboard shortcuts for opening the Game Bar, taking a screenshot, and recording a video. And if you connect an Xbox Controller to your PC, you can trigger the Game Bar by pressing the Xbox button on the controller(Opens in a new window).

You’ll be able to record activity in most applications and windows, except the Windows desktop, File Explorer, and certain Windows apps, such as Weather. Navigate to the screen you wish to record and press Win + G to open Game Bar. Several Game Bar widgets appear on the screen with controls for capturing screenshots, recording video and audio, and broadcasting your screen activity.

Click the Start Recording button or use the Win + Alt + R keyboard shortcut to capture your screen activity. Now perform whatever screen actions you want to capture. After you click on the screen, the Game Bar widgets vanish, replaced by a small floating bar in the upper-right corner of the screen through which you can control the recording.

You can tweak the Game Bar if you go to Settings > Gaming > Captures. From here, you’re able to change the default file location for your videos, turn on background recording to capture activity after the fact, opt to record video along with your audio, and switch the frame rate between 30 and 60 frames per second.

In Game Bar itself, click the Settings icon to the right of the top bar. Browse the different categories under Settings to modify the shortcuts, change the theme, tweak the widgets, set up background recording, and record the audio with the video.

How to record screen on windows 11

Record the Screen on Windows 11

We have included five easy and free methods to record the screen on Windows 11. We have used Xbox Game Bar, OBS Studio, and Free Cam to record the screen on Windows 11. The fourth way will be especially handy for students, whereas the fifth method comes directly from Microsoft in the form of a new app. Expand the table below and check out the methods at your convenience.

While Windows 11, or Windows 10 for that matter, does not come with a built-in screen recorder, there is the Xbox Game Bar that lets you record the screen with ease. It’s meant to record gaming sessions, but you can use it to record other windows as well. The only con is that it does not record the screen when File Explorer is open, or you are on the Desktop, which is a bummer. But the best part is the performance. Just by using a keyboard shortcut, you can start the screen recording. No need to wait for encoding the video!

Record the Screen on Windows 11 with OBS Studio

If you are not happy with Xbox Game Bar’s limitations and wish to record the Desktop and File Explorer without any restrictions, then OBS Studio is the best program for screen recording on Windows 11 out there. It’s a free and open-source program that works like a charm and saves video recordings without watermarks. OBS Studio may look overwhelming, but stick to the tutorial below, and you will be able to record the screen on Windows 11 easily.

If you are looking for something simple, Free Cam is probably the best third-party app to record the screen on Windows 11. It’s lightweight, free to use, has a minimal UI, and does not add a watermark to screen recordings. The app also includes a video editor with the option to reduce noise. The only complaint I have with Free Cam is that it exports videos in WMV format. No support for MP4. Nevertheless, here is how you can screen record on Windows 11 with Free Cam.

Record the Screen on Windows 11 with Microsoft PowerPoint

If you are a student looking for the easiest way to record the screen on Windows 11, you can do so using Microsoft PowerPoint. Generally, students get an Office subscription through their schools or colleges, so this might come in handy for recording the screen. Here is how to go about it.

Record the Screen on Windows 11 with Clipchamp

Windows 11 now comes with a native video editor called Clipchamp, which also lets you record the screen with ease. If you are on the stable build, you will find a placeholder for Clipchamp in the Windows 11 Start menu. And if you are on the new Windows 11 Dev build 22572 or later, Clipchamp will be installed as a native app out of the box, although it’s basically a web app.

Apart from recording the screen, it also lets you add a webcam overlay to your screen recording (but it’s optional). The webcam overlay will be especially helpful to teachers who want to create tutorials for their students. The few cons of this Microsoft app are that you can only record the screen for up to 30 minutes with the free version. Also, you can export the video only in 480p in the free version.