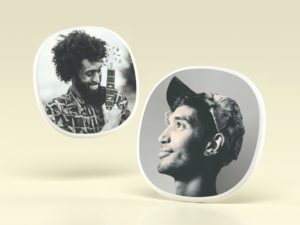 Social media marketing is the opportunity to create a direct connection between your business and your customers. This article will provide details about the top social media platforms 2021 and social media apps 2021.

After the rise and rise of visual platforms such as Instagram and YouTube, Clubhouse has gone in a new direction for social apps – audio only. Launched on the Apple Store in April 2020 and on Android in May 2021, this social newbie hosts live chats on pretty much anything you can think of.

The app gives brands the chance to set up an event to speak about a topic or simply listen in on conversations in virtual rooms to give them insights into what their audience or industry is, quite literally, talking about. Previously an invite only app, Clubhouse has built a following of around 10 million active users thanks, not least, to high-profile celebrity users such as Elon Musk and Mark Zuckerberg.

Since Clubhouse’s launch other audio-only apps have began appearing. Twitter Spaces, which slowly launched over early 2021, now reportedly has 187 million daily active users. Spotify Greenroom began it’s launch in June 2021, but seems to be lagging behind the others, attracting just a small percentage of Spotify’s large user base.

Peanut is a social network for women throughout all stages of motherhood – mothers, expectant mothers and those trying to conceive. It was set up in 2017 to help women in this community establish strong, supportive networks, build friendships and combat negativity online. It has 1.6 million users and 10 million connections across the UK, US and Canada.

Peanut offers its followers a wealth of useful resources, forums and groups, including a community area set up in 2020 for people to share their experiences with infertility, pregnancy loss and adoption. It also launched Peanut Menopause in September 2021, to expand the support network to women in other life stages. And of course Peanut also got in on the audio-action, launching a new feature called Peanut Pods allowing for Clubhouse-style voice connections.

Backed by the NHS Innovation Accelerator, Mush is another app to keep an eye on, with a similar focus on creating support networks and social connections for new mothers. Mush was also recently acquired by Mumsnet so will be one to keep an eye on over the coming months.

Unless you share Peanut or Mush’s target audiences there are limited opportunities for marketing your brand, however it’s worth taking a look to see how the app builds meaningful connections and segments its content – for new mothers, expectant mothers, women going through IVF and adopted mothers – to achieve much greater levels of personalisation and meaningful engagement.

Twitch is a live-streaming platform, mostly used by gamers to stream game play or to watch other gamers. Users can interact and engage with live streams or upload videos to Twitch for their audience. On average Twitch has over 7 million streamers per month, watched by around 30 million daily viewers.

Twitch has been actively expanding its content base, which now makes it relevant to many more businesses. Twitch’s popular communities go beyond topics like programming, video editing and comics, reaching those interested in areas such as music, art, and DIY. Music broadcasters play guitar or piano or sing, sharing covers or original compositions.

Whether or not marketers create content for Twitch, it’s a great place to learn how to market in a more natural way. The Twitch community is very anti-marketing. Brands beware – if you share pitches or webinars, the community will tear you apart and you could do more harm than good, so livestream with caution.

With SocialBee, you get more leads from social media with less effort. Their intuitive platform provides you with all the Social Media Management Tools you could ever dream of. You can automate your social media posting, directly to all of your favourite networks, so you can focus on what truly matters.

ALSO READ:   What Are the Tools for Social Media Marketing

SocialBee’s Workspaces helps to minimize risk and make sure that you don’t post anything on the wrong profiles by mistake.

What we love most: The category-based, evergreen posting features. This is what separates SocialBee from the rest. Instead of churning out loads of posts on your own made-up a schedule, you can schedule with categories in mind. This ensures you get the best content mix across all your social profiles, just like the best social media marketers do.

Hands down, this is our favourite social media management software ever, and we’ve tried them all.

Get started with a 14 day free trial, no cc required: sign up here

Monday.com has a modern and attractive interface, and it’s fairly easy to use. Considering similar apps offer a free tier of service and more straightforward subscription options though, Monday.com could be more competitive cost-wise. If you’re familiar with work-management apps, Monday.com may remind you of Airtable or Asana.

Get started by creating your own Monday.com workspace

Dance crazes and new music is the theme here, but with multiple lockdowns globally, people have taken to TikTok as a way to entertain themselves and their friends. Influencers have also flocked to the platform to join the hype.

TikTok does boast one of the largest growth percentages in 2020, and this certainly does not look to stop in 2021. Especially with more focus on monetising the platform for those with large followings.

You may not have heard of this one yet  (it was just released in December 2020), but it’s picking up steam fairly quickly. Similar to Clubhouse, Twitter Spaces is a beta version of the app’s newest audio feature. This voice chat alternative to the social platform’s traditional 280 character tweets is open to anyone with an iOS device, but only a select group of people chosen by Twitter can create their own space to start a conversation.

While the app is similar in nature to Clubhouse, Twitter is venturing into this new audio-only territory to discover opportunities and threats in this type of community. Clubhouse has addressed its challenges with enforcing community standards – an opportunity Twitter wants to figure out to make the platform safe for everyone.

Stephanie Morgan, social media manager at Social Lock, predicts some promising insights about the newest audio-only social network by Twitter, “Spaces will be a great feature on Twitter because it’s already a dialogue friendly, majority non-visual platform.” She anticipates that hosting live discussions, training sessions, and customer Q&As could be a few use cases for businesses to utilize Twitter Spaces once it is released to the public.

Although this social tool probably won’t be a good fit for you or your business anytime soon, it is fascinating to watch in real-time. Even if you can’t use Twitter Spaces, perhaps you’ll be inspired by the team’s human-centered approach to developing the feature.

Social media is transforming at an unprecedented pace. New apps and platforms are launching every day, and it can be hard to keep up with the latest in social media. Considering how much time people spend on social media, it’s safe to say that they are looking for ways to improve their experience. Because of this, new social media platforms 2021 and apps will emerge to fill the areas where current platforms are lacking. 2021 is only a few years away, so it’s definitely an exciting time for the rise of these new social media sites. Some of them already have working versions.